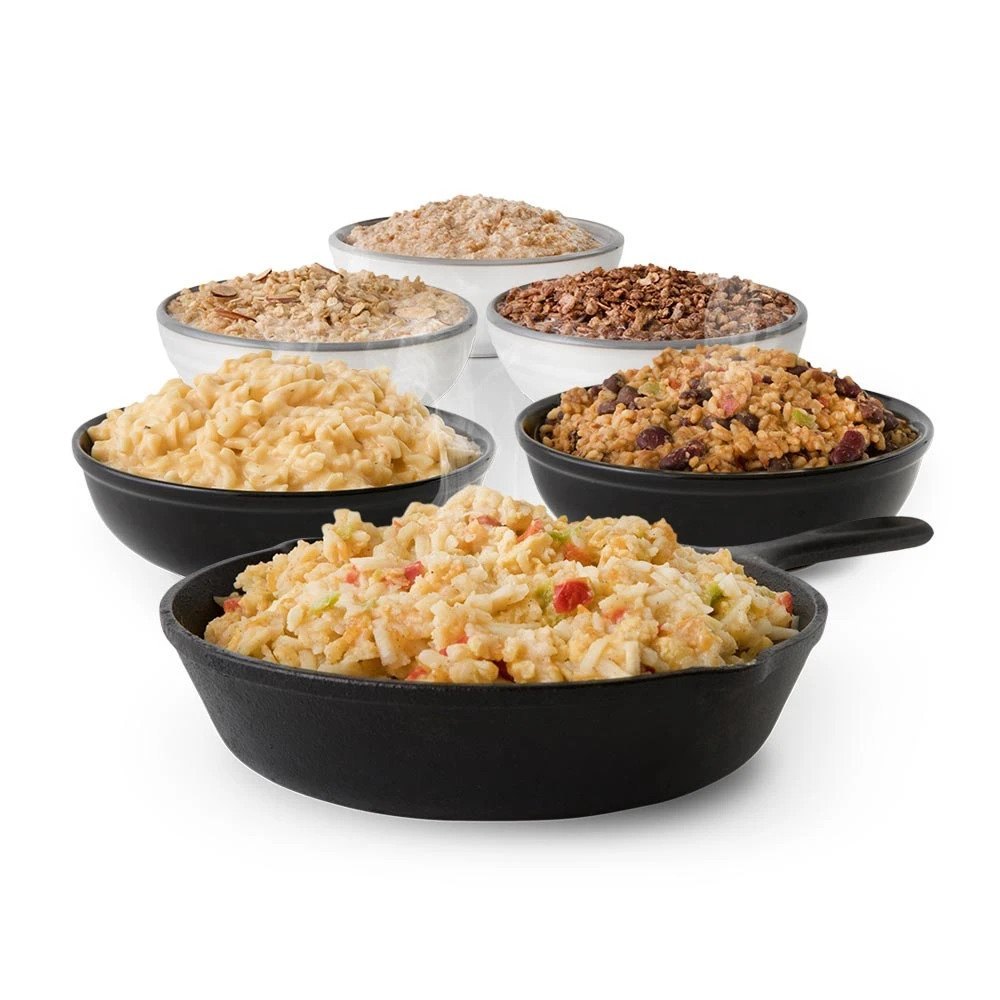 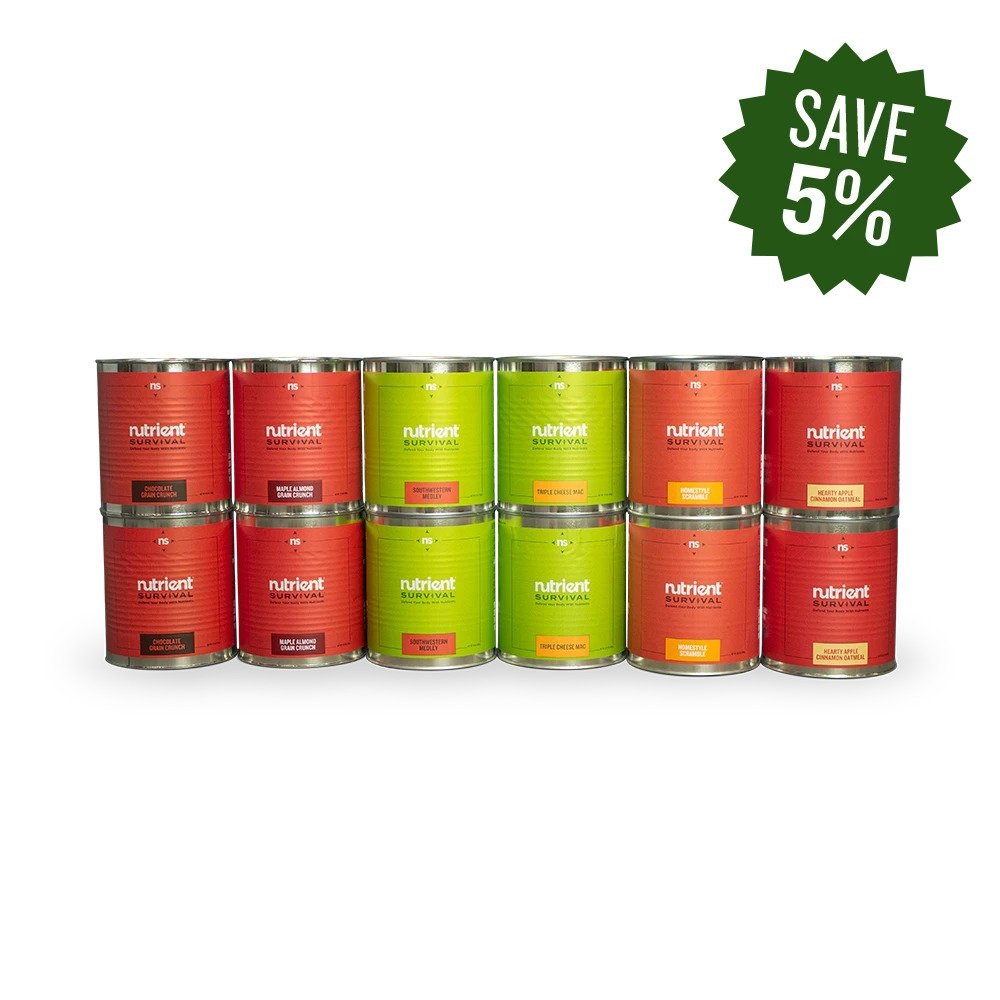 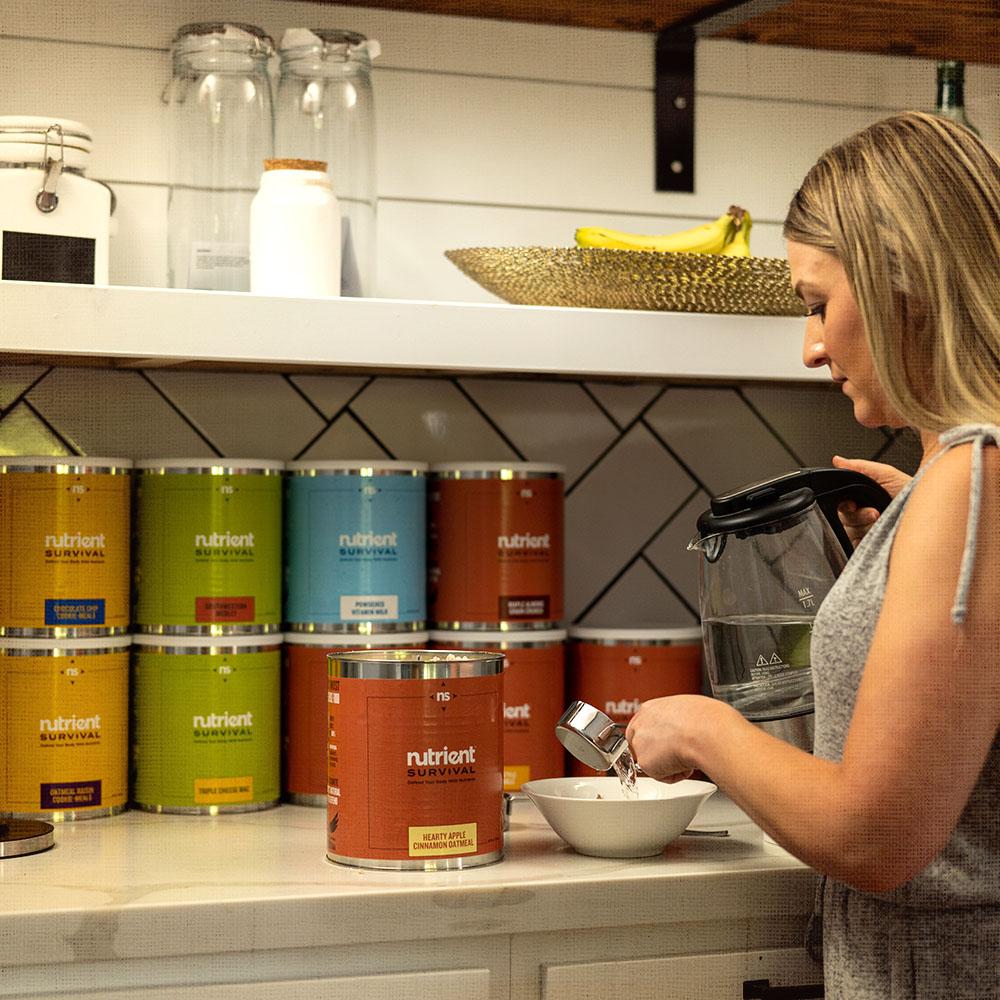 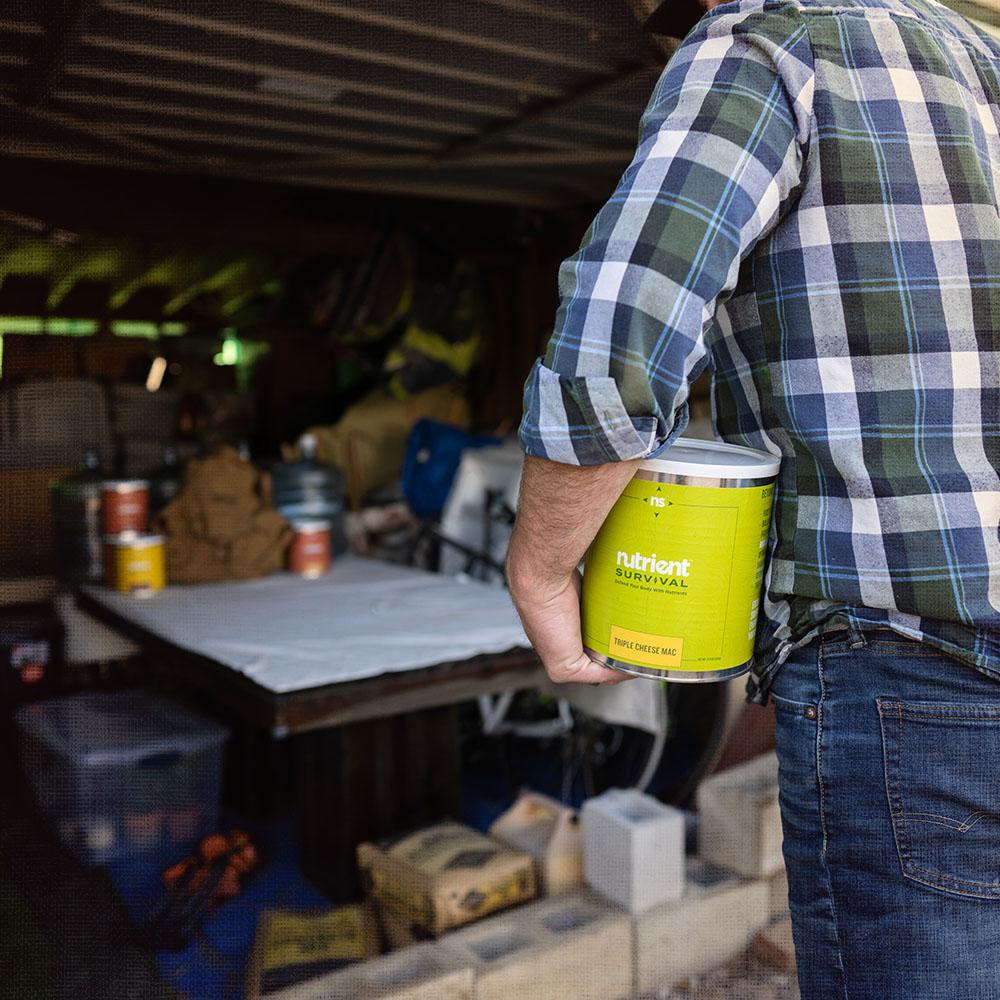 Today we will be reviewing the Nutrient Survival 30 Day Kit.

In case of an emergency, it’s imperative your body receives the sustenance not only necessary to get you through the day, but to actually help you endure the storm, and here is where this survival kit comes in.

The 30 day bundle consists of 12 #10 cans that contain 144 servings of nutrient-packed meals.  Breakfast, lunch, and dinner are covered, and, with a variety of sweet and savory flavors, we can’t wait to try them all.

It’s clear that one can’t always count on outside sources for food, and that becomes even more apparent during catastrophes.  Our review of the Nutrient Survival 30 Day Kit emphasizes the importance of staying well-nourished and prepared in such a situation.

The Nutrient Survival 30 Day Kit is a month’s worth of nutrient-dense, quick to prepare meals.

The bundle incorporates a massive list of vitamins and minerals, and it’s ready to eat by adding boiling water to the preparation.  Manufactured in the USA and with a shelf life of 25 years, this food kit comes in 12 #10 cans, two per flavor: Homestyle Scramble, Hearty Apple Cinnamon Oatmeal, Chocolate Grain Crunch, Southwestern Medley, Triple Cheese Mac, and Maple Almond Grain Crunch.

For breakfast, we start with the Homestyle scramble, a mix of cheddar, eggs, potatoes, and bell peppers.  We add a half a cup of boiling water to the one cup, 310 calorie serving size, stir, and let this combination sit for around 5 minutes, ideally covered with a lid.  The mix has decent flavor and texture.  For our palate, the salt level is fine, but we can see that for those who are used to their food being extra salty, they might miss the flavor.

As an alternative breakfast, the Hearty Apple Cinnamon Oatmeal works well too.  We can definitely smell that pleasant cinnamon and apple aroma once the boiling water hits the 230 calorie serving.

Although the oats, quinoa, apple, and cinnamon mix tastes fresh and homemade, it’s a little too sweet for our liking, but for someone with a sweet tooth, this is the dessert for them.  We added more water to the mix in order to balance its sweetness, but that turned it into a mushy wreck, so we’d rather not mess with the already pulpy texture.

The Chocolate Grain Crunch is yet another breakfast option.  In this case, we felt that adding milk instead of water would fit better with the flavor profile in the crisped rice, quinoa, oats, and cocoa combination.  And we were right!  The 250 calorie serving tastes like chocolate cereal and never loses its crunchy texture.

For lunch, we have the Southwestern Medley.  The 280 calorie serving includes beans, bell peppers, rice, and a few spices.  This mix has an amazing, firm texture and it’s quite flavorful.  Considering it has a hint of jalapeno, it’s important to note that I didn’t find it spicy or overpowering.

For dinner, we choose the Triple Cheese Mac.  At first, the 380 calorie, sharp cheddar, white cheddar, and Parmesan combination looks slightly watery and not as appetizing as one would expect, but once we tried it, it was a game changer.  The Mac it’s not only tasty, but very filling as well, so it can even also be served for lunch or as a snack.

Speaking of snacks, one can’t go wrong with the Maple Almond Grain Crunch.  The 250 calorie serving consists of crisped rice, quinoa, oats, and almonds.  Again, it might be too sweet for our palate, but, unlike the issue that the Hearty Apple Cinnamon Oatmeal presented, more water or milk can be added to the Maple Almond Grain Crunch without it affecting its crunchy nature.  The pieces of almond are especially delicious, and it gives the mix a natural, fresh feel.

It’s essential to point out that such organic and pure flavors were achieved without sacrificing nutritional value.  Gluten and soy free and containing no artificial ingredients or preservatives, the bundle also provides an average of 13 gm of protein, 10 gm of fat, and 33 gm of carbohydrates, 6 of those being fiber, plus 14 vitamins and 14 minerals, per serving.  During an emergency, all these components will help the body stay active, alert, and focused.

A drawback to this kit, that is really inherent to dehydrated foods in general, is that it absolutely needs hot, boiling water in order to bring out the flavors and be edible.  In case of a natural disaster, electric or propane methods to boil water may not be available or even safe, and starting a fire may not be an option, so it’s important to take that into account.

Moreover, the cans are a bit bulky; it would prove difficult to transport the whole kit from one place to another in the middle of chaotic circumstances.  This is the type of survival kit that is best stored and used while sheltering in place.

Nevertheless, thanks to the high quality of the ingredients used, being in possession of this kit in a time of adversity pays off, even literally.  Each serving in this bundle costs roughly $3.68, which, considering the tons of nutrients it provides, it’s a fair deal.  Also, the price is lower when the products are bought as a kit as opposed to individually, and since the company offers free shipping on orders over $100, the savings add up.

The Nutrient Survival 30 Day Kit does a great job of convincing the consumer that it’s a product worth acquiring.  From the delicious flavors, to the nutritional value, to the quickness in preparation, it unquestionably hits the mark.

After using this product, we can say that the bar has been raised in regard to the quality of the dehydrated, survival food market, and we commend the manufactures for introducing an excellent selection of blends.

Food shortage is a real risk, but while others are trampling at the supermarket, your heart and stomach will be content for a whole month, giving you plenty of time to plan the next step in your survival strategy.

We hope you found this review helpful.  Thanks for reading. 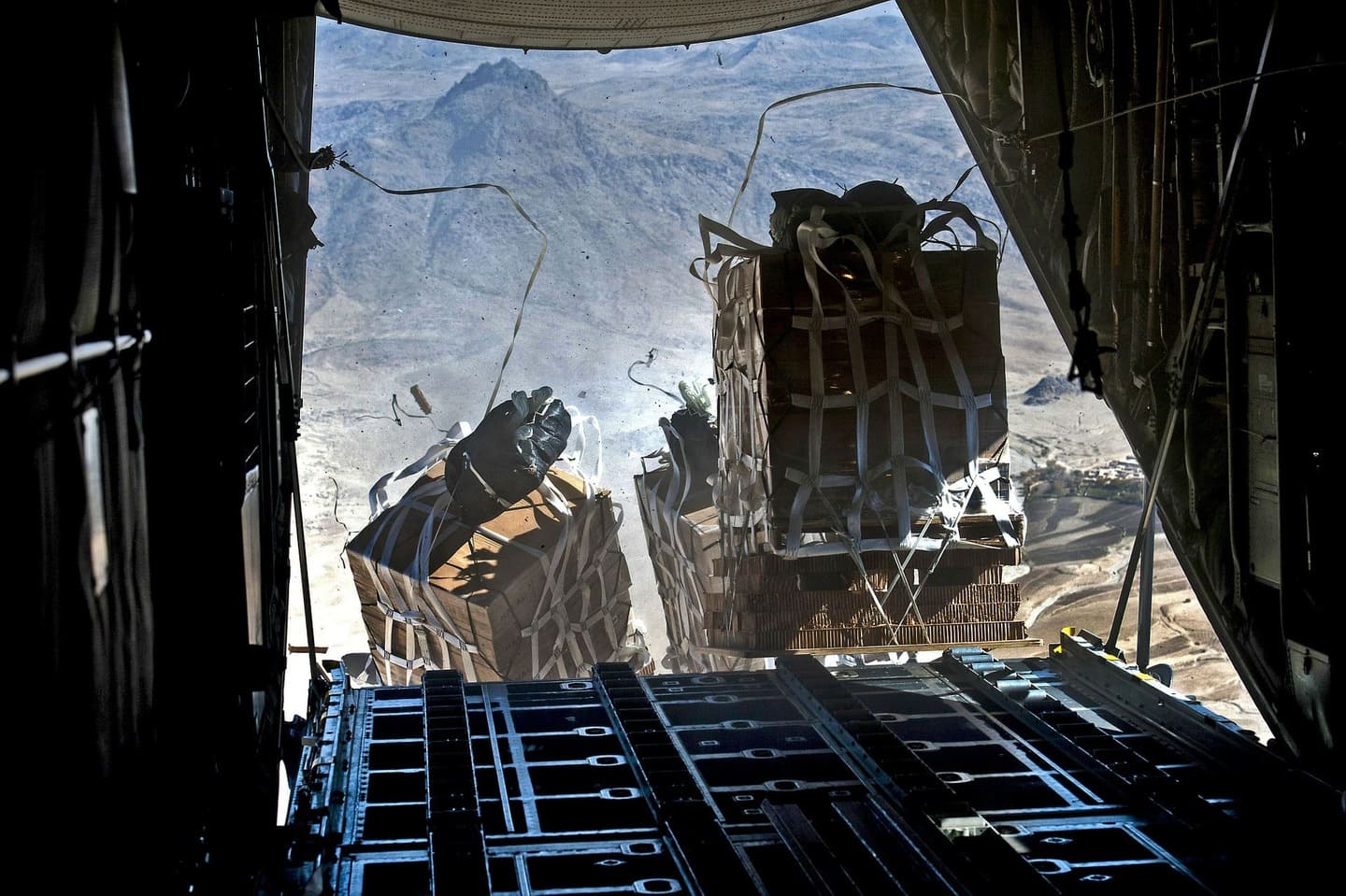 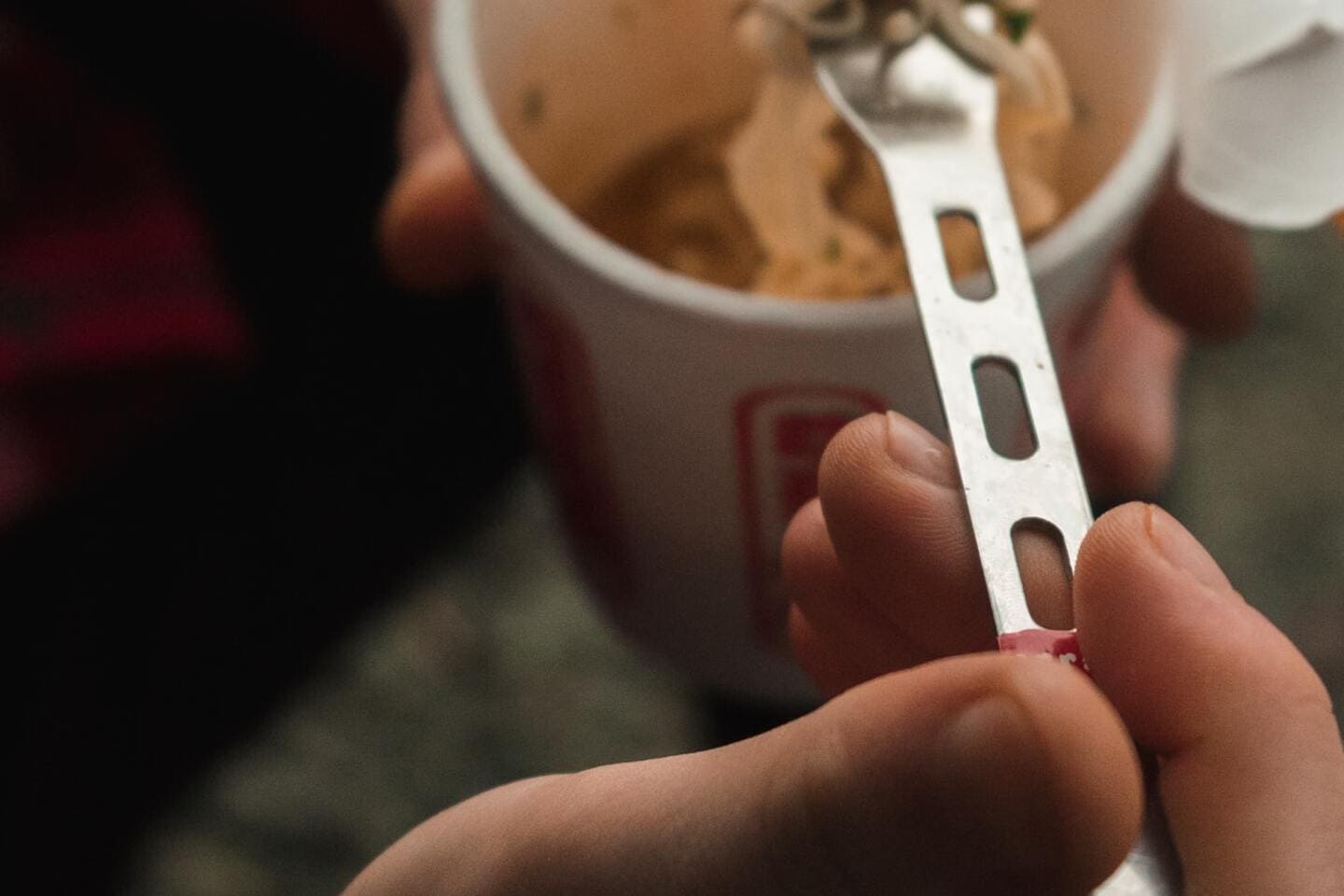